Just added to your cart

Welcome to our new store! Click here to order directly from us.

Try these Congolese beignets with a 'crisp, thin shell' in downtown Toronto

It's not often you come across a Congolese food establishment in Toronto, let alone one that specializes in direct-trade coffee and Congolese treats known as mikate.

This was my surprise when I visited the World Food Market, the name for a parking lot at Yonge and Gould streets that is currently home to a dozen or so street food vendors set up in trailers, food trucks and shipping containers.

You can eat the world through this city, but even with world-class bragging rights some cuisine can be hard to come by in Toronto.

"I don't know why we don't have more Congolese food here. It upsets me so much," said Nia Bangala, who was born in the Democratic Republic of the Congo (DRC) but moved with her family to Belgium when she was very young.

During summer of 2019, Bangala found a vacant spot in the container at the market and decided to launch Congo Coffee & Mikate House.

"Coffee and beignets are two things that are very personal to me and I wanted to improve on the traditional variety you find in Congo."

Nearly every culture in the world has some variation of dough that is fried and then dressed with a sweet sauce. In West Africa alone, I grew up on a Nigerian version known as puff puffs.

"This is a very traditional thing for breakfast we have," Bangala said of her Congolese version of fried dough, the mikate. 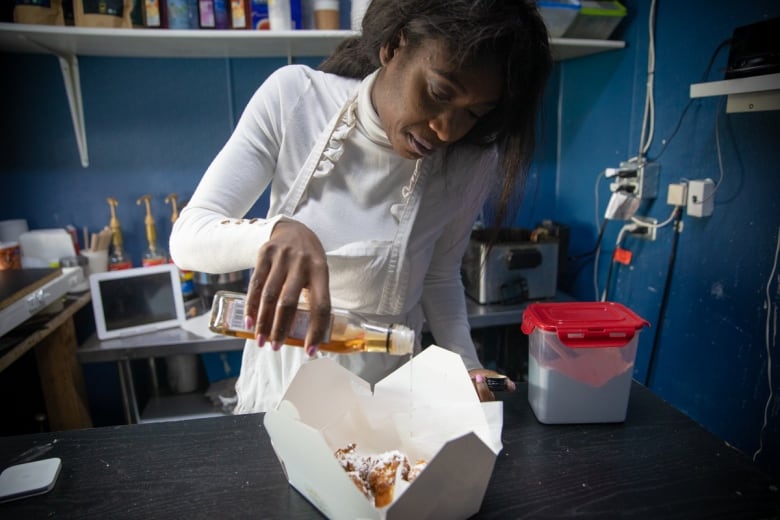 Using a traditional recipe as a launching pad, Bangala has pulled inspiration from Italian zeppole and the official state doughnuts of Louisiana, the beignets.

"Normally, recipes call for a few hours of dough rest. I rest my dough for two days, which gives it the texture I desire," Bangala said as she scooped blobs of batter into hot oil.

Within minutes, they ballooned to the size of a golf ball.

"Traditionally, these are eaten with peanut butter," a customer said to me as she waited for her order.

"Peanut butter is classic but I'm trying to do something different here," Bangala replied as she pointed to an assortment of syrups and toppings on the counter.

Moments later the mikate was finished. She plucked the golden brown domes from the fryer and doused them with icing sugar. 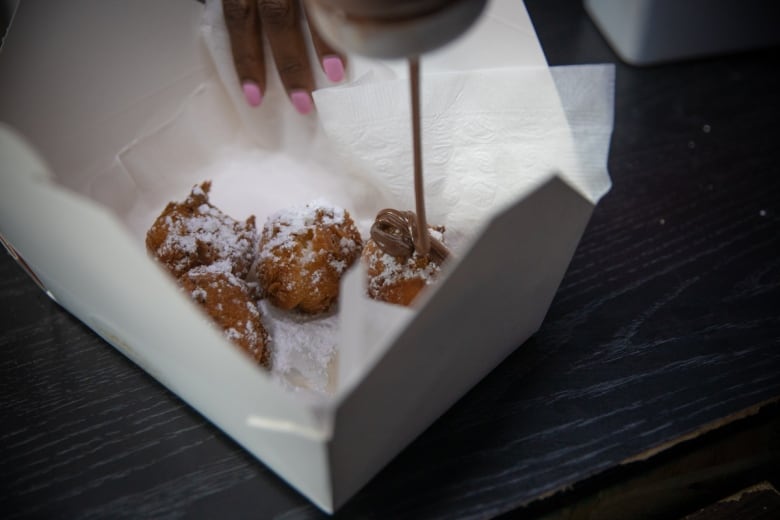 "The most popular version is with either icing sugar or some Nutella on top," she said as she slipped the finished beignets through the order window.

I'm conflicted. Bangala's beignets are great on their own. They have a crisp, thin shell that crackles with a cake-like interior.

The sweetness is there but it's muted, and adding Nutella would be overkill for me.

But peanut butter I'll take any day. Tear open the mikate and give it a generous dunk, the creamy butter complements the cake wonderfully.

"You can also have it with some coffee. I source all my coffee directly from producers in the DRC. And traditionally this is how you would enjoy mikate," Bangala said.